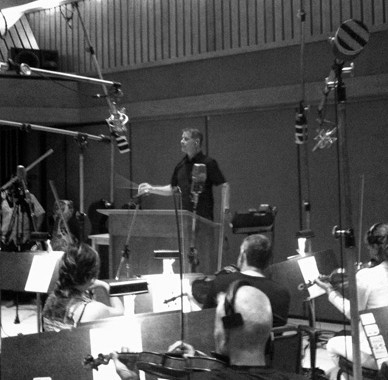 Michael Tavera began playing piano at the age of four, performing at five, and composing at 12. He trained as a classical pianist for ten years, and supplemented that foundation with a passion to master every music idiom.

Michael began his career creating a full-length, original musical while he was still in high school. He honed his talents as a song writer and performer in several bands, and shortly after moving to Los Angeles, landed a song-writing deal with Criterion Music Publishing. But in spite of his success, Michael discovered he had bigger ambitions. He stopped performing to devote himself to studying theory, arranging and conducting. While still writing songs, he began arranging for big bands. Soon, he was composing for full orchestra and scoring for television, incorporating his knack for song melody into all his work.

Michael’s scores have been heard by millions of children worldwide. He has scored over 1000 animated network television episodes including the series Guardians of the Galaxy, Planet Sheen, The Secret Saturdays, Tom and Jerry DVD’s, Cinderella II DVD, The Emperor’s New School, Lilo and Stitch, Yin Yang Yo, and Casper. Michael received critical acclaim for the music in The Land Before Time and An American Tale sequels. Marvel, Nickelodeon, Cartoon Network, Disney, Dreamworks, Universal Studios and Warner Bros. are among his regular clients.

On television’s adult side, Michael’s credits include Hyperion Bay, Charlie Hoover, Good Sports, and Melrose Place. For Von Zerneck/Sertner Films he scored four television movies, No One Would Tell, Dying to Belong, Two Came Back and Holiday in the Heart.

Michael works constantly with the best musicians in the world. He’s highly regarded on sound stages from Los Angeles to London.